Back in my younger days, I worked in radio broadcasting. In my office, the radio station was always playing in the background. No matter what we were doing, we always had one ear tuned in. So, even with the radio playing, phones ringing and conversations in the office, you know what the loudest sound was? You guessed it: silence.

If the radio station went off the air, everything stopped.  You had to pay attention to what was wrong. That silence was deafening. I finally understood what this phrase meant. 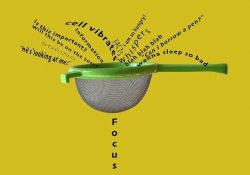 In today’s world, there’s a lot of noise… a lot! It’s rarely quiet with television, radio, social media, responsibilities from work and home. There doesn’t seem to be much silence.

Noise can be distracting. Recently, a friend of mind was counseling her son, who did not get a job he had applied for. He has applied for several jobs, and this particular one wasn’t his top choice. But he was still disappointed. His mom gave him good advice. She asked him if this was the job he really wanted, and he confirmed that it wasn’t his top choice. Then she reminded him that this was just noise. Yes, he probably was looking for validation by being accepted for a position, even though it wasn’t his first choice. But her advice was right one. It was just noise. He needed to put it aside and keep focused on his future goal.

This makes me wonder how many times I let noise get in the way and distract me from doing what I need to do.

I believe in having quiet time in the morning, where I do a daily devotional, but I know once I get going on my day, I’m really, really good at getting distracted. I fight the noise of procrastination, of worry, and sometimes even laziness.

Last fall, I wrote a post about taking four minutes a day for quiet time. You can read it here. https://talkingamongfriends.com/2019/10/03/do-you-have-four-minutes/.  It’s something I probably need to go back to when the noises get deafening, instead of the quiet. I need to pay attention to what’s most important.

By taking the time to silence the noise, you may not find all the answers. But you might find a little peace, a little less distraction, and perhaps a little more focus. Maybe it’s time to enjoy the deafening silence.

Becky is the Web Manager for ACFW (American Christian Fiction Writers) and is a writer. She's a three time contributor to various Chicken Soup for the Soul books and writes about real friendship and relationships, and all the ties that bond us. Becky is a proud wife, mother, grandmother and 2-time cancer survivor. View all posts by Rebecca Yauger

This site uses Akismet to reduce spam. Learn how your comment data is processed.